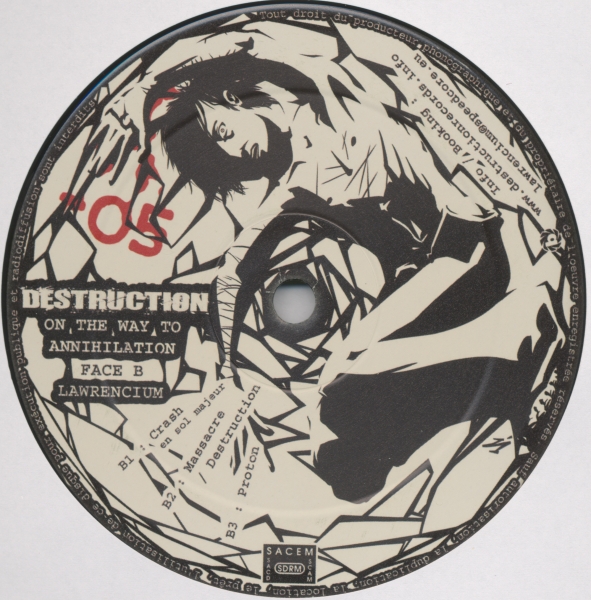 Atmospheric, uncompromised, DESTRUCTION is, as of NOW, a label to follow (DO we have any choice?)

DESTRUCTION : a new french 'speedcore-but-not-only' label run by Lawrencium, already well-known from the european coreheads for his powerful & amazing live-act, fresh speedcore with strong good ol'gabber & harshnoise influences. This first release is a split A.I.D.S (aka Helius Zhamiq from the K-bal hardcore sound-system, K-ni-bal records boss, part of the Labitox & Malaria projects, and last but not least one of the best hard/speedcore djs i've ever heard) vs Lawrencium himself. A brand new taste, while french hardcore is still celebrating its own death, in a painful & neverending agony, according to the gabberish or deathchant-like dysentery of recent releases. Strong exceptions : Hangars Liquides, definitively out of past / into the future, Underground Perversions Records, which three last releases are just perfect, and the last two Homicide by Mouse & NoName. DESTRUCTION it's said, and the tracks are really this, fast, powerful, original & well-produced. A.I.D.S introduces us with Tharkh, a dark, ambiant soundscape - but Katog leads us directly at the heart of the machine, deep kicks, a storm of industrial madness and metallic shocks, remembering me in a more brutal way the Korrigan (HL6)... Same spirit, the best of paris hardcore, but the double-speed mood & broken breaks are the sound of today - and tomorrow. Last track Katarak is speedcore avalanche, not just fasten hardcore but high velocity bullets, reject of linear patterns, and traps after traps for the innocent victims... The happy masochists should appreciate, after the first shock, this renewed fury that definitively kills all pragmatism... Ignition! On the other side, symetric tracks by Lawrencium : Crash en Sol majeur shots the walls of a claustrophobic space, no oxygen, as do some motionless Neurocore' short tracks. Immediatly follows the main track of the release : Massacre/Destruction, a long escape into the pleasures of speedcore double-kicks that can be played at any - even extreme - speed, always with huge sound, yeah nice! Fast patterns are howling rage, distorted screams, then come half-tempo stomps, brutal groove, then back to the unleashed ferocity... Killer track. All is ashieved with Proton, strange mutation of speedcore and rumbling harshnoise... Far from what could be attempted of this mix, but still no compromise, and the proof there's a universe to explore between pure noize (Merzbow, Menche, Masonna...) and abstract speedcore, the one that forgets all the gabber & hardcore gimmicks... Atmospheric, uncompromised, DESTRUCTION is, as of NOW, a label to follow (DO we have any choice?). LWIK